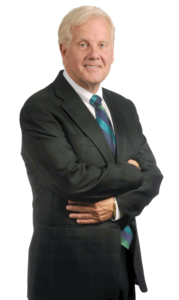 Gene Carr has a well-earned reputation as a turnaround artist who knows what it takes to revitalize stagnant sales in difficult markets, increase productivity in capital-intensive operations, and build high-performing teams who can deliver bottom-line results in revenue growth, profitability and market share capture.  With a career that spans nine states and dozens of subsidiaries, conglomerates and stand alone operations, Gene has successfully lead companies through mergers, acquisitions, divestitures, forbearance proceedings, initial public offerings, and strategic alliances and partnerships.

Gene began his career as an Account Representative with Cincinnati Suburban Press where he earned progressive promotions to Director of Sales & Marketing. He conducted pioneering research on geo-targeted marketing using zip codes to connect advertisers with their end clients and helped to propel a 50% increase in revenues over six years. His successes garnered industry attention and in 1986 he was engaged by Arundel Communications to implement similar methodologies for their Arcom publishing group. Carr quickly recognized that Arcom needed re-engineering on both its sales and operations fronts and led the centralization and modernization of production facilities while simultaneously transforming the company’s sales processes into an integrated sales model. By the end of Carr’s tenure, Arcom was recognized for its high quality publications and enjoyed growth of both market share and net revenues.

His experience with advertisers gave Carr unique insights into the marketing needs of his clients, and in 1991 Carr co-founded a boutique marketing firm that catered to the public relations requirements of organizations and politicians with complex communication challenges.

Carr returned to the publishing industry in 1994 as the Vice President of Sales & Marketing for Trinity Holdings, a subsidiary of the UK-based Trinity Mirror. Trinity looked to Carr to bring modern sales and marketing strategies to a group of weekly newspapers that were struggling with year-over-year declines in circulation and advertising sales. Within eighteen months, Carr drove sales up by 10%. Soon after, he was appointed publisher of Trinity’s only daily newspaper, and lead operational improvements and sales strategies that took the money-losing publication into positive EBITDA performance with revenue increases of 9%.

In 2000, the owners of Brown Publishing Inc. approached Gene Carr to lead their Western Division after a series of acquisitions had failed to materialize in the hoped-for economies of scale. Among the challenges that faced the new CEO were quality control issues that threatened to undermine several key accounts, a unionization drive, and a corporate culture that created inefficiencies in everything from IT systems to sales processes. Gene led a substantial business transformation strategy to address these issues, and within six months the company was meeting its performance standards and had successfully safeguarded its key accounts.

American Community Newspapers (ACN), an amalgamation of 114 weekly and daily community newspapers, was operating under a forbearance agreement when they brought Gene Carr on board in 2001 to turn around their flagship Minnesota Division. Investors had already written down their $40 million investment by 50%, and Carr’s appointment was seen as a last stage effort to salvage the company from bankruptcy. Within 10 months, Carr had the division back on track financially and he was promoted to CEO of the entire company. His mandate was to lead a corporate-wide business renewal with the goal of selling the company within three to five years, in hopes of recovering some or all of the equity shareholders’ original investment.

Tackling one division at a time, Carr consolidated production operations, eliminated administrative redundancies and divested the company of money-losing subsidiaries. He modernized sales strategies and rebuilt entire management teams. Within a year, ACN was operating in the black and when it was sold in 2004 for $88M through a private equity/management buyout.

As the largest non-institutional shareholder in the ownership group, Carr continued to serve as CEO & President and member of the Board of Directors. Over the next two years, he spearheaded the greatest spurt of growth and profitability of any US publicly-traded newspaper group to date, with compounded annual growth rates of 17.2% in cash flow, 7% in revenue and 18.7% in EBITDA. Carr took an outdated publishing model and transformed it into a 24/7 multi-media and audience-responsive operation that included 114 individual websites, dot.tv news segments in each of 43 cities, and a first-in-the-USA online flyer and coupon platform with geo-targeting capabilities (Zip2Save.com). He negotiated a dozen new acquisitions and start-up opportunities and harnessed state-of-the-art business intelligence tools to drive advertising revenue growth across all regions.

By 2006, American Community Newspapers was enjoying EBITDA returns of $16.9M on $76.8M in revenue, and was recognized as an attractive acquisition target by Courtside Acquisitions. Carr represented the ownership group through six months of complex negotiations and SEC reviews, which culminated in an agreement in 2007 for the sale and merger of ACN for $202M, 11 times trailing EBITDA.  After the sale and merger of Courtside and American Community Newspapers Carr was named President and CEO and elected Chairman of the Board by the public shareholders.

Soon after the completion of the sale of ACN, the publishing industry was hit by an unprecedented economic downturn that brought many of its competitors to their knees. With an onerous debt load due to the highly leveraged buy-out, ACN’s owners were left little room to manoeuvre, and filed for Chapter 11 in 2009. In an unusual move and reflecting a high level of confidence in Carr’s leadership capabilities, the banks retained Carr as their CEO and president through the transition. Without access to new operating capital, Gene was able to lead downsizing and restructuring initiatives to reduce debt, and exceeded budget targets by 20% during the restructuring. He successfully kept the company operating with no disruption of service to local communities, readers and advertisers, until the company was sold in July 2010. Carr continued as the CEO under the fourth ownership group of ACN in ten years through May of 2011.

Through his company, GCP Consultants LLC, Gene currently provides Interim Executive Management, Consulting, and Board Governance expertise to corporations and industry associations that are embarking on a significant change agenda related to financial or strategic restructuring, merger & acquisition activity, and expansions into new markets. Most recently Carr was hired as the interim CEO to turnaround a diverse set of assets for Sandton Capital Partners. Under his leadership he turned around declining revenues and EBITDA that lead to the successful outcome of selling the  radio stations Star Radio Group (5 radio stations) to Alpha Media, DSP Towers (4 different towers) to InSite Towers, daily and weekly newspapers, the number-one digital site in between Richmond, Virginia and the District of Columbia along with the most technically proficient manufacturing center in the US and only three in the world to Berkshire Hathaway Media Group and a real estate portfolio consisting of 7-different parcels including 2-large commercial office complexes to 6-different buyers in 19 months.

Instrumental to Gene Carr’s success as a leader, both in good times and in bad, is a pragmatic “role-up-his-sleeves” approach that enables him to hone in on the root causes - and not just the symptoms - of inefficiency and barriers to growth.  By engaging staff at all organizational levels in identifying and solving problems, and taking the time to listen to the perspectives of stakeholders both inside and outside the organization, Carr is able to put in place a business transformation plan that delivers immediate and quantifiable results.